At 87, Newman alumnus Gial Kaegi ’67 has touched many lives throughout his life. Giving is just something he loves to do, he said. Whether it’s giving his time, talent or finances, Kaegi has a heart for helping others.

He said his love for giving was something he developed because of his mother. “My mom was always hunting for the underprivileged,” said Kaegi. “She searched for and found people who tried really hard but could never make it. She was always giving back.” 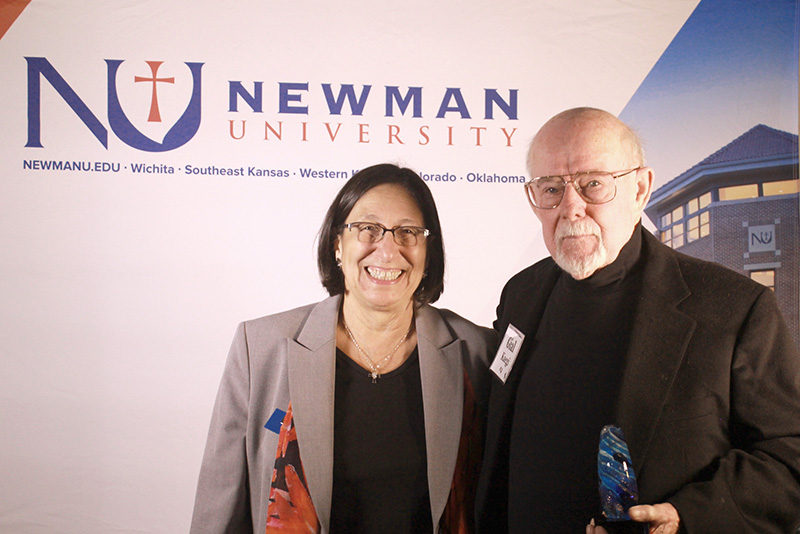 Though he hasn’t always been in the position to give financially, volunteering is something he has done his whole life, he said, adding that he often described himself as a “professional volunteer” when that was all he was able to do.

While reflecting on his past, Kaegi said he could remember some hard times. He talked about working for a railroad section gang in Burrton, Kansas, making 38.5 cents per hour. And while in the Army, he and his wife, Margaret, had to make do on $39 each month.

Kaegi said his wife shared his love for volunteering and giving, making their 55 years together even more fun. He said he remembers very well the day he met her.

“She was babysitting for my cousin,” he remembered. “I went over there for supper one night and I was standing in the living room … I had on a pair of swimming trunks and red and brown cowboy boots. She walked in there and I introduced myself.”

He added, smiling, “And she didn’t really like me. She said I didn’t make a very good impression.”

But their story had really just begun that night. And years later, after some ups and downs, they found themselves in a position to begin giving back to the community.

He and Margaret loved to volunteer for Botanica, The Wichita Gardens. They not only volunteered their time but also purchased the supply of candles and sacks for one of the organization’s annual events.

Together, they also built wooden birdhouses for the organization. “We would build anywhere between 125 to 500 birdhouses to donate each year,” he said.

Kaegi also made wooden toys for the Ronald McDonald House, Starkey and the Salvation Army.

As a self-proclaimed “tree hugger,” some of Kaegi’s favorite volunteering happened while sitting on tree boards for various cities he’s lived in, including Derby and McPherson. He also served on the horticulture council at Kansas State University.

Kaegi holds five degrees, carrying more than 400 credit hours from several different universities, and he credited his wife for getting him through those college years.

He graduated from Sacred Heart College (Newman University) in 1967 as one of the first male graduates. He also taught business classes at the university for some time.

He said Newman has a special place in his heart, which is why he loves to give back financially to the university. He said his favorite reason to give is simply because of the quality of education the students receive.

“It’s by far the most disciplined college I’ve ever been to,” said Kaegi. “When you come out with a degree from Newman, you actually know what they’ve taught you, or you didn’t graduate. Knowing the students are getting that kind of education is one of the main reasons I love to give to Newman. I can’t think of another university who is as devoted to education as they are.”