The Newman University first All-Alumni Reunion in recent memory drew alumni from as far away as California, New York, Florida and Virginia back to the Newman campus to enjoy a weekend packed with events, see old friends and professors, and reconnect with the ever-changing campus.

Some alums came for a single event, some visited for a full day, and others brought their families and stayed the entire weekend. However long their visit, everyone seemed to enjoy returning to their alma mater, said Director of Development for Sciences and Health Sciences Therese Wetta, ASC.

“We had a good turnout for many events, and a whole range of alums, both female and male,” Wetta said. “The canvas painting for adults class was very popular, as well as the beer tasting.”

Haley Hungate ’15, who organized volunteers for Mass services over the weekend, is a new alum who said she enjoyed seeing old friends as well as meeting older grads. Hungate and other former Troubadours served as the choir for Mass during the weekend event.

“It was cool to sing with some former Troubadours who I didn’t know,” Hungate said.

Reunion planners designed the weekend to include a variety of events for people of all ages and backgrounds. Activities included the groundbreaking for the Bishop Gerber Science Center, as well as a barbecue dinner and stories about the Sacred Heart Hall ghosts.

Other events were Newman-style TED Talks (brief speeches on Technology, Entertainment and Design), presentations by faculty and alumni on topics such as mindfulness, head concussions, the Adorers of  the Blood of Christ and the new science center, and readings from five Newman alumni authors, including Clare Vanderpool ’87, whose first book, Moon Over Manifest, was awarded the 2011 Newberry Medal.

One especially popular event was the Friday night beer tasting. Patrick Edwards ’07 hosted the event, which allowed alums the opportunity to sample beers from eight different countries where the ASC Sisters have a presence.

“We wanted an event that everyone could enjoy and also tie it back to the university,” Edwards said. “So we thought, ‘Hey, everyone loves beer.’”

Edwards said they started with a craft beer from St. Louis, where the United States ASC headquarters is located, and moved on to beers from seven other countries, all paired with a short speech from Betty Adams, ASC ’61, ’66 about the sisters’ efforts in that country.

“We came for the weekend to see wonderful friends and former professors, and fellow alums,” said Josh Chilson ’03, a former student government association president and recipient of the Ablah Award, who brought his wife and daughter all the way from Clearwater, Fla., to attend the reunion. “It was a really nice event and we look forward to coming to more alumni events in the future.”

See more photos from the All-Alumni Reunion weekend by clicking on the picture below. 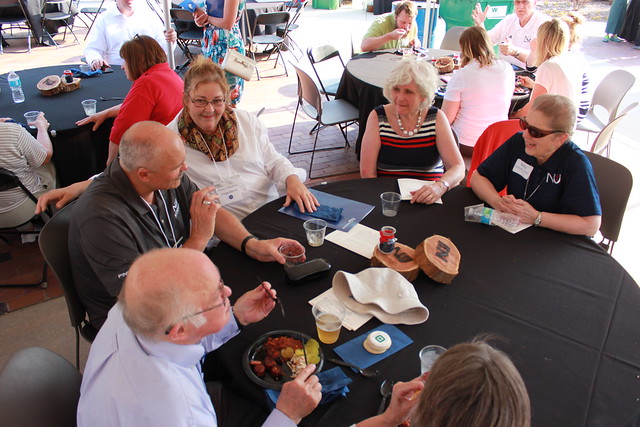