So perhaps it was no surprise that on October 2016, Newman announced a partnership with The Wichita Eagle to establish the “Difference Makers for Wichita Awards.” The awards were created to celebrate the contributions and positive influences of individuals and organizations that have made a significant difference in the Wichita community. Awards were created in different categories, and area residents were invited to nominate possible awardees.

On Feb. 25, Newman, the Eagle and Cooks Heating and Cooling co-sponsored a banquet, where Difference Makers award recipients were recognized. More than 250 people attended the banquet, which was the first of what will be an annual event. The following awards were bestowed: l-r: Vendla and Kerry Smith of Zinta Inspired Language receive the Murdock Award from Tom Shine and Steve Coffman of The Wichita Eagle.

The Murdock Award for Business, named for Wichita Eagle founder Victor Murdock, is awarded to an area business making a positive impact by pioneering efforts to address a major community challenge or by implementing ideas to enhance opportunities for employees and impact our community. The 2017 recipient of the award was Zinta Inspired Language, a company that seeks to eliminate communication barriers through language training to students from Canada to Ecuador. The Russ Meyer Award for Community Leadership, named after longtime aviation advocate, philanthropist, and community leader Russ Meyer, is given to an individual making a positive impact in our community through demonstrated excellence in leadership and outstanding initiative to create solutions for critical issues. The 2017 recipient was Fred Berry of Berry Companies, Inc., for his community involvement in and service on boards such as Wesley Medical Center, Heartspring and the United Way.

The Ivonne Goldstein Award for Community Volunteer, named for the late Ivonne Goldstein who served on the boards of or raised money for more than 50 Wichita organizations, is presented to an individual who through outstanding volunteer community service and commitment is making a measurable difference. The 2017 recipient was Tom Sanders, former CEO of the DAV/VA Medical Center, who is active with 11 Wichita non-profit organizations.

The Tarcisia Roths, ASC, Award for Not-For-Profit, named for former Newman University President Tarcisia Roths, ASC, is awarded to a mission-driven not-for-profit organization that is creating a significant impact in our community. The recipient was the Wichita Women’s Initiative Network (WIN), which provides support and services to women leaving domestic violence shelters.

The Brian Bergkamp Student Service Award, named for the late seminarian Brian Bergkamp who died while trying to rescue a fellow kayaker who had fallen into the Arkansas River, is given to a high school student who by example has demonstrated a selfless and giving attitude to positively transform society. The recipient was Taylor Cusick-Wetta of Collegiate High School, who is involved with 14 organizations in Wichita, including the Special Olympics. 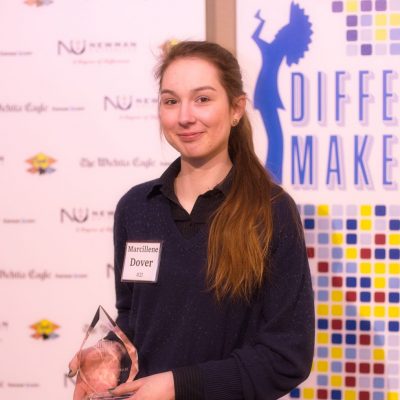 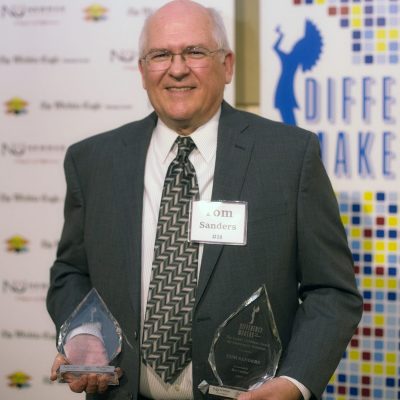 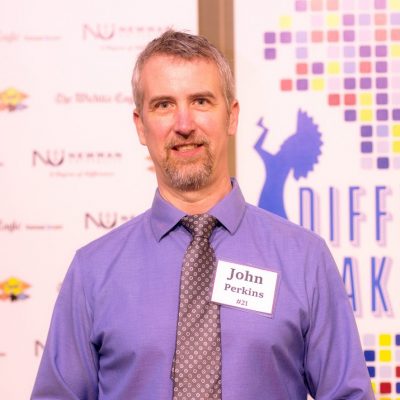 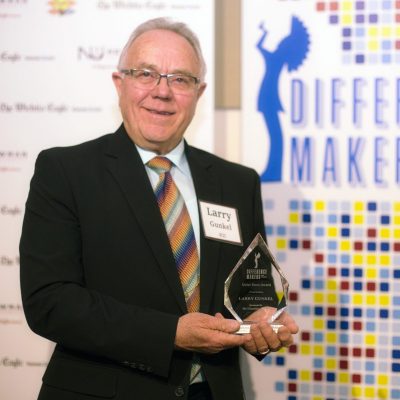 The awards banquet also featured four “Quiet Heroes,” [pictured above] or individuals who do not seek recognition but rather are inspired through an unwavering commitment to the day-to-day service of others to make a positive difference. The recipients were East High School teacher John Perkins, who has motivated many students to be successful in school and beyond, retired U.S. Postal Service letter carrier Larry Gunkel, who played a crucial role in founding the Letter Carrier Food Drive and the Kansas Food Bank Food 4 Kids backpack program, and Marceline Dover, an advocate for expanding the Kansas Medicaid program, KanCare. Ivonne Goldstein Award recipient Tom Sanders also received a Quiet Hero award.