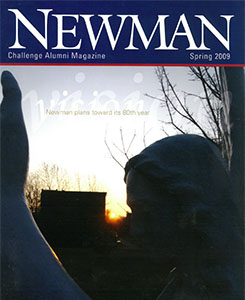 The Newman University Strategic Plan 2009-2014 is a blueprint for the university over the next five years.

In an effort to better meet the needs of adult, transfer and returning students, Newman University is making final preparations to launch five new academic programs in the fall 2009 semester.

A new painting of a man who is revered by many in the Wichita and Newman communities will soon be completed and installed in St. John’s Chapel.

Bayer, Cooper to be honored at Spring Commencement

Michael Bayer and B. Lee Cooper will receive honorary Doctorate degrees at the Spring 2009 Commencement.

Newman offers help for people hit by the economic downturn

Newman University is responding to the needs of the community during the economic downturn by offering several special programs and events.

Assistant Professor of Education Ted Anders, Ph.D. recently helped the university “Go Green” by initiating the donation and installation of a lighting system in a teacher education classroom on the school’s main campus.

When Mark Potter chose to return to his alma mater and revive a men’s basketball program that had been dormant 11 years, he knew it would be a challenge.

More than 200 fans and patrons of Newman University athletics gathered Jan. 31 to honor standout volleyball player Diana (Ford) Crook ’85 and the district and area championship 1983 men’s baseball team as the Class of 2009 inductees into the Newman Athletics Hall of Fame.